Name: Factory Sequences
Occupation: Producer
Nationality: British
Current release: Factory Sequences's The Heart Of Dark Matter EP is out via True Romance.
Equipment recommendations: I recently got a plugin called Trackspacer by Wavesfactory which is really cool. It uses a sidechain input of a particular frequency range from one track to cut frequencies in another track which helps reduce build up or overlapping frequencies when you’re mixing. Pretty geeky stuff but it’s extremely useful...easily overdone though!
The S2400 by Isla Instruments looks awesome, I think it’s a clone of the classic E-MU SP-1200 sampling drum machine. I haven’t got one but it’s on my list. (laughs)

If you enjoyed this interview with Factory Sequences and would like to stay up to date on his output and activities, visit him on Facebook, Instagram, and Soundcloud.

It was based around an Akai S950 sampler and a Roland Juno 106 in the early 00s. I ran them through a 16 channel Mackie mixing desk hooked up to a Mac G4 running an old copy of Emagic Logic. As soon as funds allowed I added a cheap Drawmer LX20 compressor, some decent monitors and got an SH-101.

I didn’t know much about production or mixing but it was really exciting making my first tracks.

I’ve always been a bit of a music gear addict so my set-up has evolved over years of scouring Ebay, acquiring new bits of kit when I feel that my life can’t continue with any real meaning until I get whatever it is I’m obsessing about. (laughs)

Early on I mainly looked to my musical heroes for gear choices by finding out what they used on my favourite tracks. These days, I just try stuff out and see if I like it.

I’m currently loving my Ensoniq ESQ-1 which does lovely, gritty digital bells and pianos. Something made by Roland from the early 80s is always near to hand, you can’t go wrong.

The digital studio promises endless possibilities at every step of the process. What is it that you actually need from these potentials and how do you go about selecting it? How do you keep control over the wealth of options at the production stage?

I use a lot of hardware but mainly for sound creation as I find that works for me, creating synth patches on plugins with a mouse doesn’t really do it for me unless it can offer something unique or a sound that I can’t achieve with hardware.

To some extent, this process naturally limits getting sucked into the vortex of endless possibilities.

I love the idea you can create amazing tracks with no gear but at the same time I get a buzz out of reading about epic sessions and techniques in massive pro studios with tonnes of gear.

My own studio, I guess, is somewhere in between, closer to a smaller and more intimate set-up but crammed with kit! I like having enough gear to experiment with different routings and processing possibilities.

Being hands on is important to me to keep me interested and help generate ideas. I’ve tried various software midi controllers for all sorts of stuff in an attempt to recreate the experience of using real synths and drum machines but generally I come back to the real thing or just hammer out beats on my keyboard!

My ideas are generally born out of noodling about on various pieces of kit, creating happy accidents, just having fun with inspirational tools.

On my latest release on True Romance, I came up with the main synth parts for the 2nd track ‘Luminous’ in the middle of producing the 1st track ‘The Heart Of Dark Matter’. As I had a solid drum track already going, I started layering up parts on a DX7 which I processed in Logic and then bounced them through my Akai S950 which helped glue it all together.

It was all totally wrong for the original track I was working on but I came back a few weeks later and turned one of those ideas into the 2nd track on the release. 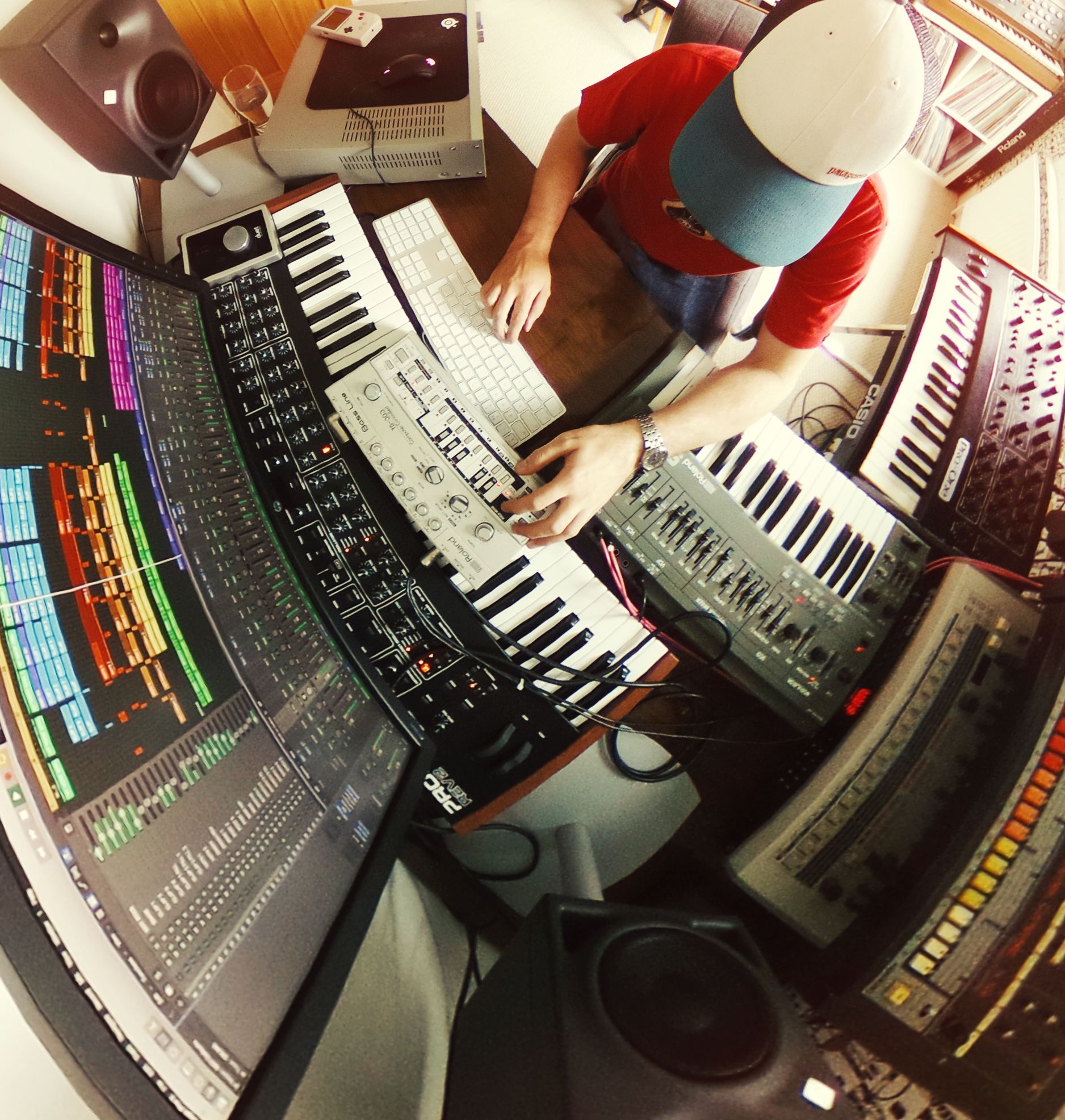 I tend to start my tracks with a synth riff or a hook of some sort and a kick to try and get a groove going pretty quickly. It’s a pretty simple process, really; if it sounds decent the next day, it’s a keeper! If not, then I bin it. I then work on that track until I’m bored and then I bounce it down into a folder where I keep ideas.

I come back to things periodically and sometimes it can just click - I’ll then commit to the track and get it finished.

Despite the aforementioned near endless possibilities, many productions seem to follow conventional paths. How do you retain an element of surprise for your own work – are there technologies which are particularly useful in this regard?

I love sequencers and arpeggiators that are built into analogue equipment. Triggering a synth with a drum machine pattern, like running an 808 part into a Sequential Circuits Pro-One or a Roland SH-09 can create rhythmic melodies that I would never come up with by myself.

The Beatstep Pro by Arturia is cool for this type of thing, too. I’d love to have a go on a Sequentix Cirklon hardware sequencer- they look ace. Linking up different pieces of gear in this way can spark creative moments from which whole tracks can build on.

I tend to have an idea of the kind of track I want to create before I start, i.e. basic style and tempo, no doubt loosely based on my love of classic tunes. I’m constantly bombarded with links to fresh, and vintage tracks from multiple sources so I’ll usually have an idea of the type of dance floor I want to write for.

The piece of gear I’m most into at that time, whether it be hardware or software, is also more often than not a major catalyst for my next track.

How important is it for you that you personally create or participate in the creation of every element of a piece – from sound synthesis via rhythm programming to mixing?

I would probably want to create all the elements myself unless, say, I worked with a vocalist (I can’t sing) or if I needed a specific instrument playing that I can’t play well enough to make it work. I also write music for TV and media which requires a wider palette of sounds than for my electronic tracks. I recently produced a track where we replaced a string section I’d created with samples with real players - the result was much more organic and alive.

Having tracks mixed by a dedicated mix engineer isn’t something I’ve ever had done before but would love to try out at some point in the future.

Bit of a boring answer probably but I think smartphones have changed the creative process a lot for me. I find it super useful to be able to bounce a track, at whatever stage it’s at, onto my phone so I can listen to it on loads of different systems like in the car or on some rubbish speakers in my kitchen.

Being able to ping it over to a group of mates via Whatsapp for instant feedback can be helpful too, if not a little brutal sometimes!

To some, the advent of AI and 'intelligent' composing tools offers potential for machines to contribute to the creative provess. Do you feel as though technology can develop a form of creativity itself? Is there possibly a sense of co-authorship between yourself and your tools?

It’s a weird one, that … I wouldn’t mind listening to a track that was built by AI - if a track is good, it’s good! But to be honest, creatively, as a producer I’d be questioning the point of using technology that built a piece, or even part of a piece of music for me as I enjoy doing it all too much, myself.

Having said this, it could be an interesting avenue to explore as it’s a difficult thing to imagine until you’ve experienced it.

Do you personally see a potential for deeper forms of Artifical Intelligence in your music?

As an experiment, it would be interesting to see what would or could happen, especially in electronic music. I think interesting things can come from being blissfully unaware of what came before, so in that regard, maybe AI can create completely new forms of music? Who knows, maybe a new AI genre of music could trigger the next big cultural phenomenon.

I’d be interested in a universal controller that has easily editable LCD screens that let you know what the parameter is that you’re controlling. I know companies have touched on this before in the past but I haven’t seen anything that does it that successfully yet.

Trying to program a synth or whatever with a controller without knowing instantly or intuitively what a particular button or knob does is a real buzz kill.

"I love sequencers and arpeggiators that are built into analogue equipment. Triggering a synth with a drum machine pattern, like running an 808 part into a Sequential Circuits Pro-One or a Roland SH-09 can create rhythmic melodies that I would never come up with by myself."