If you enjoyed this interview with Vince Watson and would like to stay up to date on his music, visit him on Instagram, Facebook, Soundcloud, and twitter. You can also read our earlier Vince Watson interview, where he expands on a wider range of topics.

My god … my first ‘studio’ was my mum’s dining room. My parents decided it was a good idea for me and friends to use the room for afterparties instead of my bedroom. (laughs)

So it turned into the music room … and the entire walls and ceiling were covered in the egg boxes …. ah the innocence of not having a clue.

Well, we had the move from big heavy expensive analog hardware to smaller digital convenient hardware, but over the years I’ve always ended up back with the analog stuff mostly for studio work.

Conversely for live gigs I completely went the opposite way, and only use digital stuff on stage. I simply got fed up paying for repairs to the golden girls: 101,808,909.

The digital studio promises endless possibilities at every step of the process. What is it that you actually need from these potentials and how do go about you selecting it? How do you keep control over the wealth of options at the production stage?

It took me a long time to use a computer for music but one of the worst and best things I did was buy Omnisphere as one of my first plugins …. yeah what was I thinking!

Nowadays I do research before I buy anything. With so much choice and crossover functionality, it’s good to really understand the tool you are using. Arturia sent me Pigments 3 last year and I’ve been enjoying making new sounds in that … but I always have my ‘Go-To’ sounds saved that feel like home. 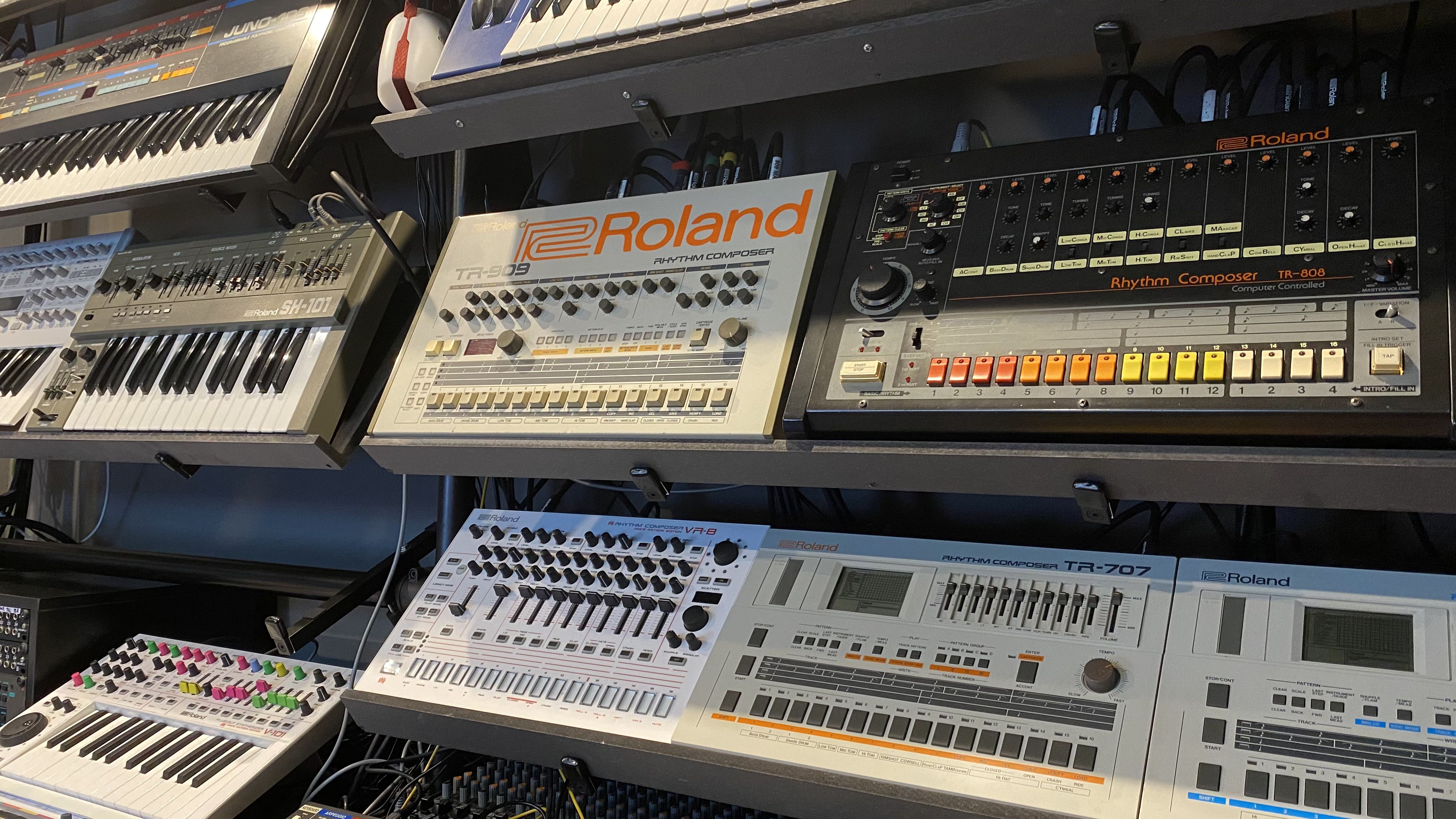 With SSDs becoming so cheap now, it’s made life much easier to actually do work outside of the studio. With huge libraries being portable, it’s amazing. I was never really a fan of making music in Ableton with just stock stuff to replace later … never found that as inspiring.

When I’m working in the studio though, I never use everything at once. Normally I focus on 1-2 bits of kits at a time and extract what I want from that, dump the audio and then work on the Mac. I just built my studio 12 months ago, so if my wife reads this then I should say it’s the perfect space for me (some new additions coming). (laughs)

When Softube activated VST3 support for Ableton, that was it. I immediately bought both the console and fader and racked them in a case. It’s the main thing in front of me on my desk, it’s great.

I have some great controllers that work really well. I use an Elgato Streamdeck XL as my main Ableton launcher. I use an Akai LPD8 controller for live gigs, but also in the studio as it has the best rotary knobs on any Akai controller - much less resistant so you can really make quick adjustments. I use an Akai Midimix with my Akai Force as a hands-on mixer. I also use an iPad for Omnisphere sometimes.

Finding the balance between tactile and screen control makes your work less monotonously. 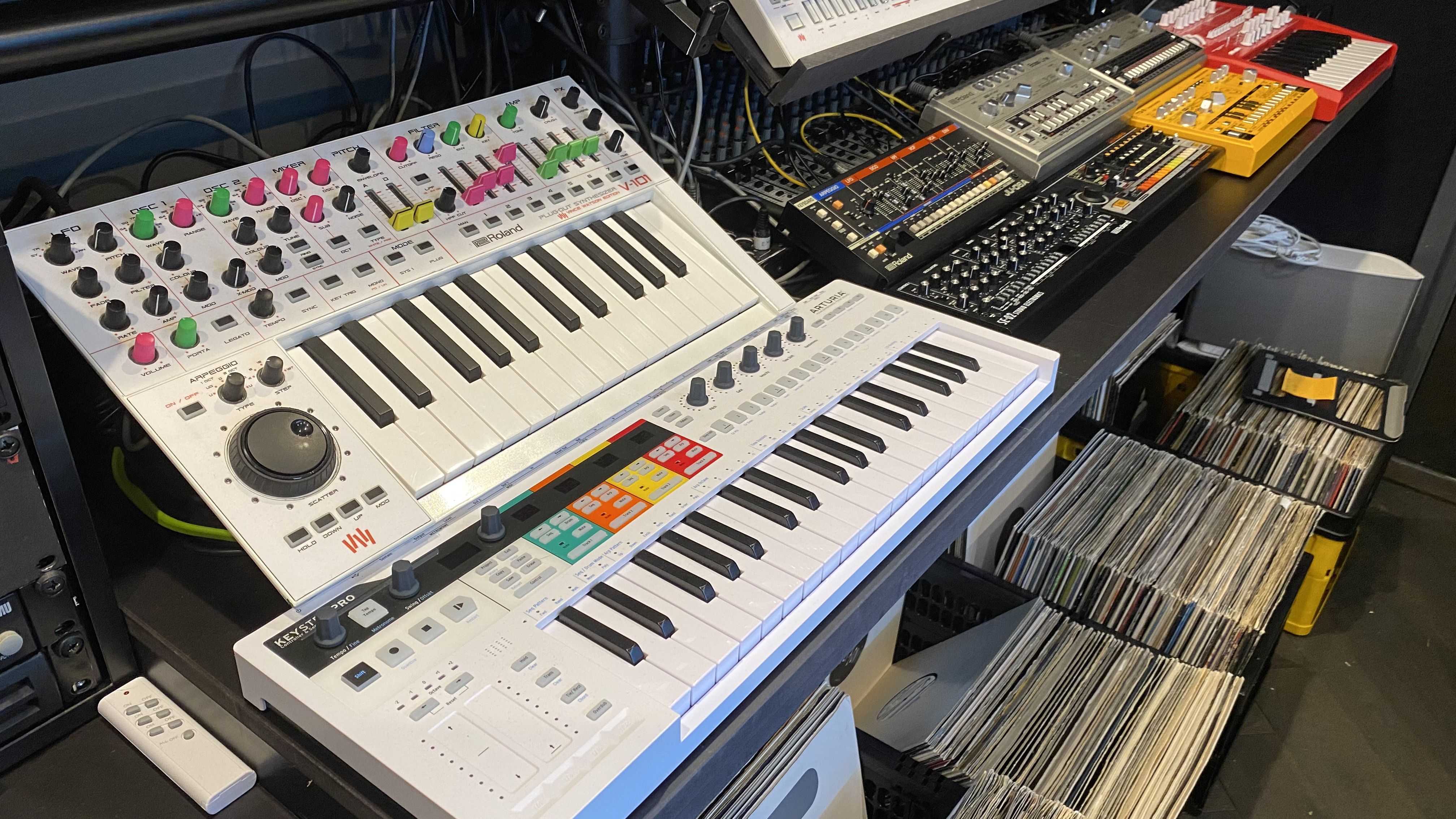 I think the tools are there to enable you to extract what you’re looking for when you’re in the creative zone. When you’re not feeling so creative, the technology can help you find something that inspires you, but you need to know how to use it correctly. So having the discipline to knowing your gear becomes really important for those uncreative moments when you still have a deadline.

My most recent purchase was the Akai Force. I bought it to play Live with - yeah, what happened to that plan (laughs) - but after using it for a while as a stem launcher, I become more interested in how I could use it for other creative workflows.

It’s an ongoing battle but I ‘think’ I finally got on top of it again. Of course, it revolves around buying 4TB hard drives … but essentially my Mac has 6 internal drives, which I then schedule clones to 6 external drives.

My studio is in the garden so as a backup to that in case something happens, I have them also backup to a big drive in the house over ethernet. On top of this, I have a separate Project drive and a separate Sketch drive. The sketch drive has thousands of ideas over the years (some of which I still extract from), and the Project drive has everything I’ve completed with all current projects that are unfinished being live on the Mac.

The backups disappear after I complete them and store into the Project drive. Phew …

Despite the aforementioned near endless possibilities, many productions seem to follow conventional paths. How do you retain an element of surprise for your own work – are there technologies which are particularly useful in this regard?

A little trick I use is to layer sounds underneath that use the same midi notes as the original parts, but are somewhat randomised with an arpeggio. For example, I would throw a string sound under a stab and keep the string low in the mix, which keeps the main sounds intact but adds a kind of randomised effect underneath. Keeps it interesting and also is fun to put together.

For me though, the element of surprise happens when you’re in that creative zone anyway. 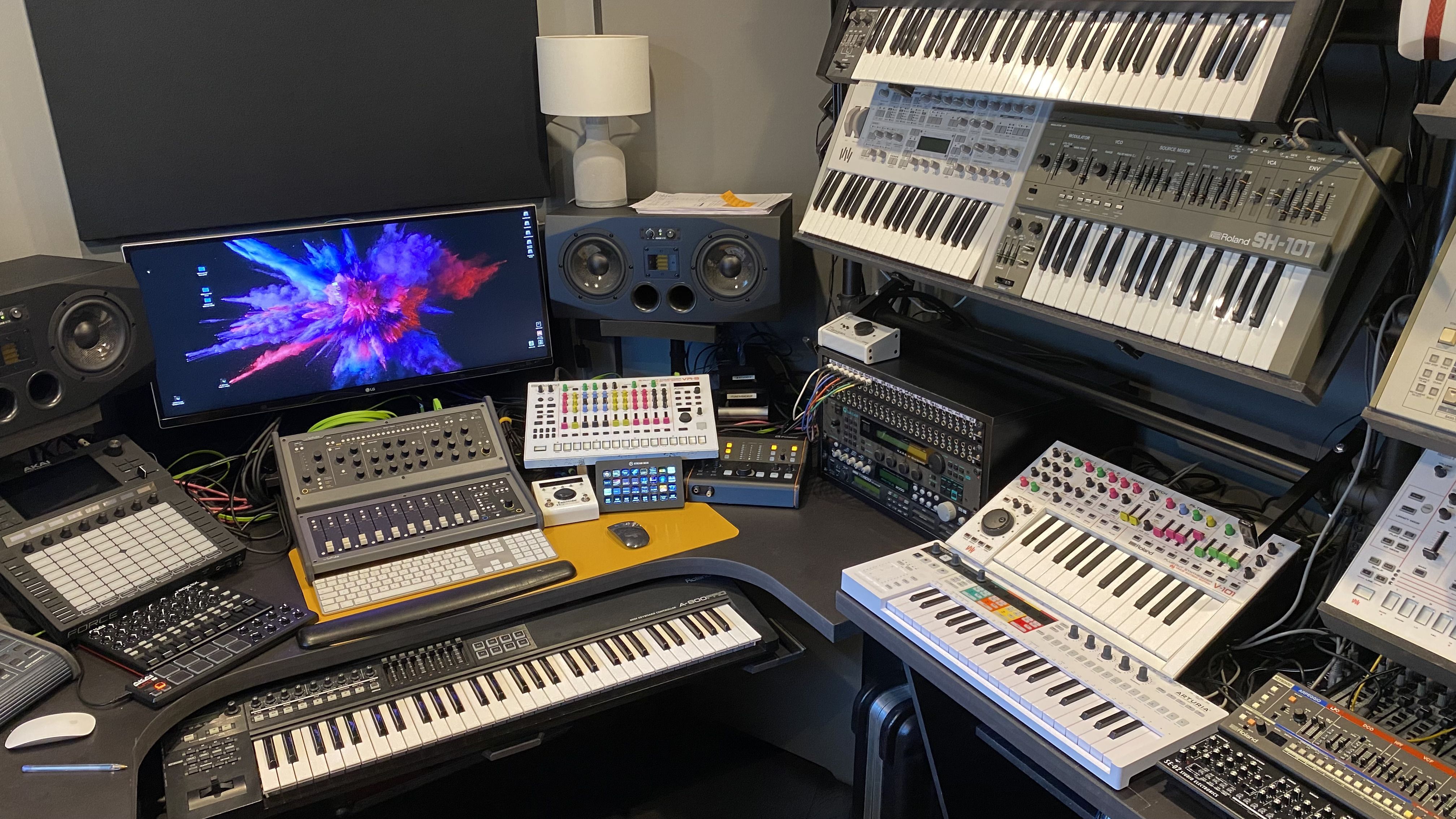 Production tools can already suggest compositional ideas on their own. How much of your music is based on concepts and ideas you had before entering the studio, how much of it is triggered by equipment, software, and apps?

For albums, I either have the entire concept ready before starting or it’s done after the first track and I realise I could make an album out of the idea. I need a theme or a story … that keeps it interesting for the listener, but also for the artist in me. For singles its less important but I still try and keep a sense of purpose about the release, instead of just throwing out random tracks.

I tend to avoid using equipment to base my theme’s on, just to avoid using the same sound (or arpeggio - you know the one!). Or naming a track based on a synth model or preset, because you're almost guaranteed it will be done by someone else and it's not unique enough for me. But I will completely contradict myself by admitting that Spitfire Audio Neo completely inspired me to write the follow up to Serene entitled ‘Species’. There is an exclusive! Coming 2022. (laughs)

How important is it for you that you personally create or participate in the creation of every element of a piece – from sound synthesis via rhythm programming to mixing?

If I'm not working in a collab and just working solo, it is everything. There is no other conceivable route to releasing something other than me doing everything. There isn’t anyone else to do it anyway, but if I am collaborating I’m completely cool with whatever needs done. I’m a control freak with my own stuff, that’s my quality control … but working with others is really fun and I just let it all go.

Coming from the MPC world to In The Box was profound for me, and not an overnight success. Ableton was the catalyst for this and still is the centrepiece of everything I do, so that would definitely be classed as profound change.

The move to NvMe SSD has also changed how I make music as I can now stream huge amounts of highly detailed sounds without any issues. That’s been liberating. 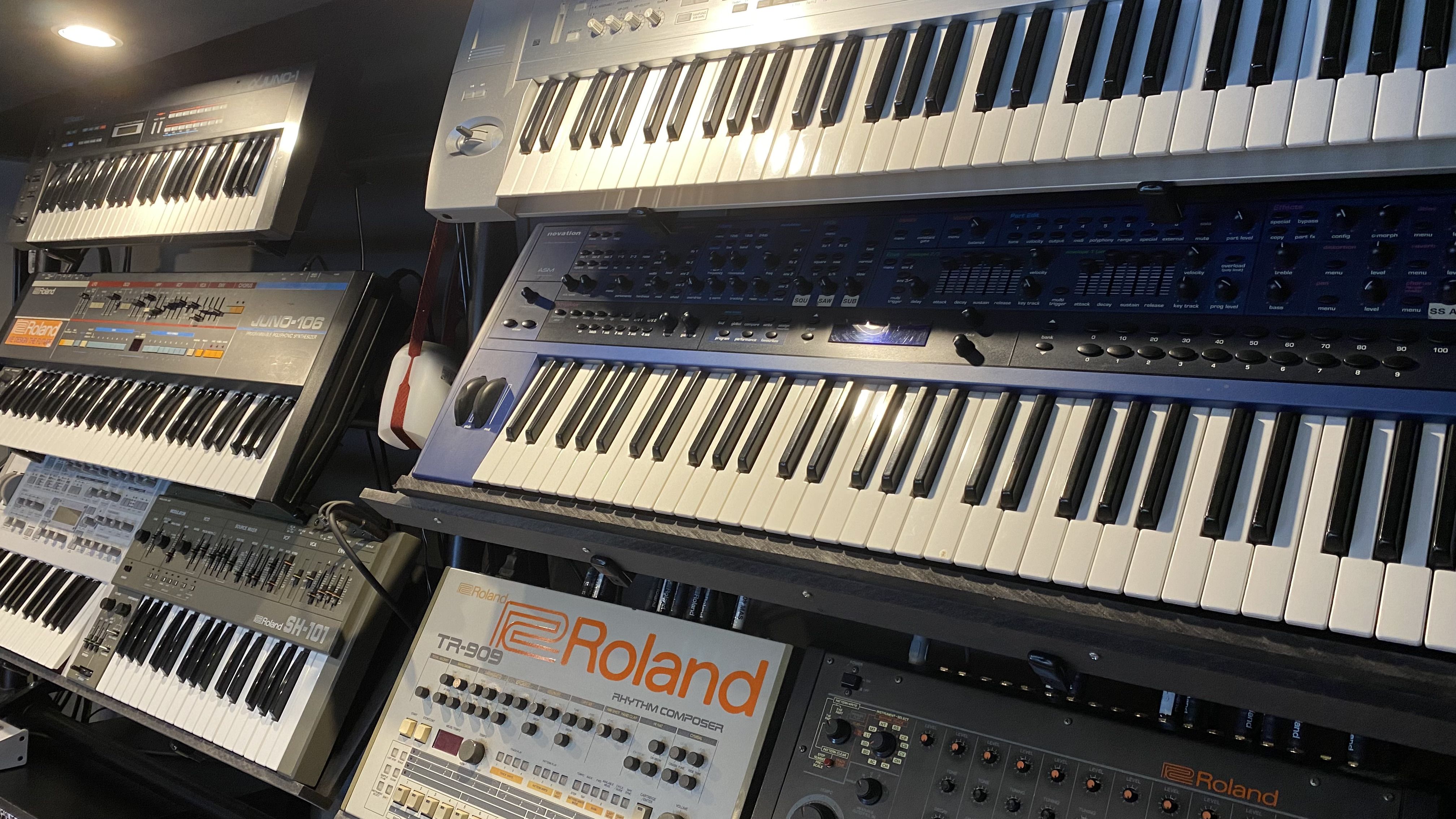 To some, the advent of AI and 'intelligent' composing tools offers potential for machines to contribute to the creative process. Do you feel as though technology can develop a form of creativity itself? Is there possibly a sense of co-authorship between yourself and your tools?

Humans have a vision of what AI will do and think, but I don’t think it will ever be what we expect it to be. That’s just our arrogance as a species, same as how we think if alien’s exist that they will take some kind of anthropomorphic shape.

There was a quote from someone who explained it really well. Essentially an AI machine had to make as much money as possible for a stationary shop …and 100 years later there was millions of Staples on the moon. AI does not think like a human.

In the studio, if I'm relying on technology to create the music and ideas, then I guess there should be some kind of co-ownership, so god help the techno trance movement if AI creates a publishing agency as those arpeggios gotta be recouped. (laughs)

Do you personally see a potential for deeper forms of Artifical Intelligence in your music?

Only if it’s me that’s in control. (laughs)

What I mean is that if I’m not able to extract my intention, then it really is a collab and that’s not what was intended when I started. This might be cute at the beginning, but after some time has passed, the romance of creation and feeling pride of your talent and ability becomes lost and you would lose the passion for creation when you know deep down its not fully you that’s coming out at the end.

I wish someone would make a bloody USB mixer! That’s a game changer … so simple yet nobody has bothered yet. I don’t mean an analog mixer with USB support. I mean a mixer with 16 x USB inputs. Take the computer out of the equation for live gigs. Cmon Roland … MX2? Someone!

For the creative side, we're already so close in terms of using samples for string libraries, but somehow, we have to find a way to have instant loading and no ram use …. dreaming.