Gold: I consider writing music a chance-meeting of free flowing influences impossible to predict, which I think is the good part about it. Personally I prefer co-working. The best songs I've written in my life I did together with other people.

I never have much problems in inventing a new song. The most critical and frustrating moments for me happen when I'm stuck in a production. Sense of humor always helps. A really hilarious trick is offered by a deck of cards created by Brian Eno called "Oblique Strategies". Each card puts forward, quote, "a challenging constraint to break creative blocks by encouraging lateral thinking." Sounds complicated but is most amusing to do. And sometimes it even works.

My experience is also that "being stuck" creates this sinking feeling of running out of time. Most often that is not the case at all. You have enough time. Take it. And if there's still not the slightest idea showing up at the horizon? Then try to imagine what Bowie or some others of your heroes would do in your position. It can free your mind in a quite extraordinary way and provoke stuff you otherwise would have never dared to do. It may as well ruin your career. But hey, no risk, no fun.

Some people claim that creative tensions can be highly beneficial. As a listener, I certainly always thought that The Breathtaking Blue turned out particularly exciting, although you've stated that it wasn't particularly enjoyable to create. How do you look back on this today with some hindsight?

Gold: With our previous albums we had covered past and present even though in reverse order. Suddenly all road signs pointed towards the future. We had never cared much about the future and there was not a single song left up our sleeve. Finally we decided to produce the first song that would fly by, in fact from its very embryonic beginning until its very final stage, and to carry on in this mode one by one.

We had absolutely no idea where we would end up and if we would like what we were doing. Usually you start an album with a selection of demos that give you a rough feeling of a general direction but we were perfectly "plotless". We wrote and arranged the songs as if we would timber the planks for a raft to carry us across an ocean of uncertainty. There was no other option, not even stopping and becoming again the punks we had been before our fabulous rise to pop stardom a couple of years ago. Because if we'd stop, we would quite simply drown. Not a very pleasant situation and it caused a lot of tension, especially between Bernhard and me.

In my estimation this production was a real test if we were tough enough to continue Alphaville's voyage into The Breathtaking Blue. The album itself never ranked really high in my Alphavillian top ten list. Not until we did the actual remaster that revealed what a beautiful and astonishingly coherent album it is.

Music and sounds can heal, but they can also hurt. Do you personally have experiences with either or both of these? Where do you personally see the biggest need and potential for music as a tool for healing?

Gold: First of all, sounds may hurt, music doesn't. I admit answering your question depends very much on the particular definition of music. To me music in any case opens the human mind. Sometimes it may be hurtful but it is healing in the end. Music can make you happy and also sad but even the sadness will finally heal you. In other words, whatever "my" music does it turns out for the good.

Secondly, people themselves decide which music they want to hear, not the artist. If they use music as a tool that's ok by me though I don't think that music IS a tool. It is art. And art is free. It is in the nature of art that you can never be sure what happens next. That's the opposite of a tool.

There is a fine line between cultural exchange and appropriation. What are your thoughts on the limits of copying, using cultural signs and symbols and the cultural/social/gender specificity of art?

Gold: In the world of art you have no responsibility. You play. You invent. You create. But you don't play with other peoples' lives. You don't invent weapons of mass destruction. You're not building concentration camps. Art is the place of complete freedom, the most unrestricted space that exist. Who would say art is a killer or a thief in the face of the evilness committed in every other department of human occupation.

What we see here with these discussions about alleged cultural or social appropriation by artists to me is nothing but the vice versa attempt of boarding art by political groups in order to finally turn it into a political or ethical weapon. But art is international, interracial, intersexual, the place where difference rules peacefully instead of that well known "equality" with all its bigotet and intolerant implications.

I repeat: Freedom of art takes irresponsible artists. Artists owe absolutely no responsibilty to anyone.

Our sense of hearing shares intriguing connections to other senses. From your experience, what are some of the most inspiring overlaps between different senses - and what do they tell us about the way our senses work?

Gold: Obviously there are means that can change the relations between our senses and therefore change our ways of perception. Timothy Leary was a prominent exponent of the idea that doing so would offer solutions for many problems of mankind. It remained an unfulfilled dream.

I presume that it is probably too starry-eyed to believe you can change the world for the better just by crushing up some LSD. But from an inspirational point of view it holds a fascinating potential to say the least.

Art can be a purpose in its own right, but it can also directly feed back into everyday life, take on a social and political role and lead to more engagement. Can you describe your approach to art and being an artist, especially in the light of Afternoons in Utopia which carried messages extending far beyond the conventional tropes of a pop song?

Gold: With Afternoons we tried to narrate a coltish and light version of what was happening inside of us, when we started as a band. In this respect it is the album before FOREVER YOUNG. It was not our intention to make any political or philosophical impact as for instance in songs like "Beethoven",  "Fools" or "Next Generation" later on. We simply wanted to relate something about the guys behind the previous album, like: "Look, these are the "playful" realms from where we came."

We wholeheartedly thought communicating with dolphins was a really great idea, just as if talking to an alien race from outer space. It would probably expand the human mind positively, turning us into somthing more ... graceful? I think "gracefulness" actually is the top subject of the whole album. Gracefulness in sad as well as in happy events.

Generally I think art as such is the incessant quest for beauty in our profane existence. That is why it can universally deal with all possible issues, why not with political or social matters. But with its unavoidable emphasis on beauty even in the most unspeakable aspects it is more often object of disgust in political contexts or of the so called "common sense" which makes it a mixed blessing in political affairs. Propaganda would be the more useful tool and in a way it is the ugly cousin of art at least in my humble opinion. On the other hand, art can adopt aspects of propanganda and turn it into true artistic things. It's a funny game!

What can music express about life and death which words alone may not?

Gold: In my imagination there is no exclusiveness in art. That's why I disagree with the assumption behind this question because words can be music as much as music can be words. Both bear the potential of being immortal expressions from us, the fundamental mortals, who are tragically equipped with that cruel perception of the eternal. 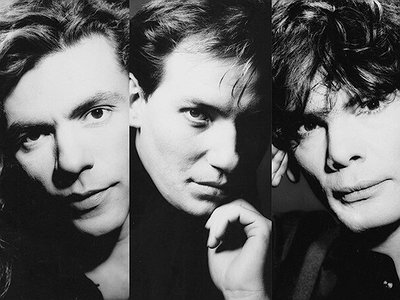 Marian Gold: "Art is free. It is in the nature of art that you can never be sure what happens next."