Name: Cord Henning Labuhn
Nationality: German
Occupation: Producer, DJ
Current Release: Let Live feat. Big Shug with Ferreck Dawn on Mother
Recommendations: Let’s pick something German. Say Wolfgang Beltracchi, Rotes Bild mit Pferden. Moreover because of the story behind this genius - look it up. And asking this question to the 10 year old me, the answer must be the movie ‚Texas‘ by Helge Schneider.

If you enjoyed this interview with Cord Labuhn / Robosonic, check out his homepage, which is a portal into his personal world of music.

When did you start writing/producing music - and what or who were your early passions and influences? What what is about music and/or sound that drew you to it?

The first records I owned were some Eurodance, Dire Straits and Helge Schneider I think. I started recording myself probably at the age of 11 with a little analogue voice recorder onto micro cassettes. I wrote my first – and pretty bizarre – records say age 14. I was rather inspired by guitar music, Jimi Hendrix, Punk Rock, some psychedelic Dadaist comedy and songwriting…and I was definitely not taking myself or my fellow musicians too seriously. And we didn’t even try to be cool with what we were doing.

Age 15 or so I fell in love with HipHop music, and its whole culture. So I grew into this competitive game with enough ambition to press a collection of productions, beats and scratch tools onto a vinyl record when I was about to turn 18. Paid with money I had made gardening the unpretentious green space of a plastic production facility in the West German countryside.

Through various distribution companies I learned a bit about the record industry and I shipped my record to the States. Later when I walked into Beatstreet or Halcyon record stores in NYC seeing my records being sold there, I got this concept of my music travelling the world. Then I worked quite hard to catch up with my music, to become a traveller myself.

For most artists, originality is first preceded by a phase of learning and, often, emulating others. What was this like for you? How would you describe your own development as an artist and the transition towards your own voice? What is the relationship between copying, learning and your own creativity?

Well, first I sampled my way through other HipHop beats. So my drum archives would consist of all the cropped Kicks and Snares from instrumentals I liked. I’m sure I made a whole bunch of beats with the kick and snare of „Watch Out Now“ by The Beatnuts in the beginning, just as an example. DJ Premier has had a massive influence on my sample chopping techniques, not only directly but of course through all the other beatmakers inspired by his previous work.

When the Robosonic project had been defined as an open minded, undogmatic electronic music act and was known for playing House & Techno records, there was an opportunity to really understand the maths of functional club DJ music and build a formula to make music that would get played by others. First I really did have some problems to play by those rules, until I accepted the challenge of making something within household structures, sounds, tools that had been defined over decades in House & Techno, but which was still fresh, unique, distinctive and recognizable.

So creating organic hybrids between classic HipHop and ‚underground‘ electronic dance music – full of references – is probably my most recognized contribution to contemporary electronic music. I’d also say that this also helped me to find my voice in different genres - I have now contributed to Dance, Downtempo, Ambient, hypnotic ‚HypHop‘ and Rap.

As I said before. First motivation was making beats. Rather New York inspired, out of samples, drums. Back then I didn’t know any great rappers so my instrumental HipHop leaned a little more towards arranged tracks than just short loops. Later in club music – like the first uptempo breakbeats, house and techno – I had to dig deeper into the concept of functional arrangements, although most of my musical ideas happen to be loop based, and make sense through their repetition.

Nowadays I’d say my challenge is combining songwriting elements with club music, telling stories with sample references, tension/release and vocals. And groove is key to all of it. One challenge I had to accept was dubbing down the many ideas and options that come up in production into what is essential.

I never really learned how to mix properly. It has always been something intuitive and so back then, starting to work with a professional, practised, mix engineer like Jesco Lohan was an incredible improvement in my workflow, productivity and the all-over quality of my final product.

What was your first studio like? How and for what reasons has your set-up evolved over the years and what are currently some of the most important pieces of gear for you? 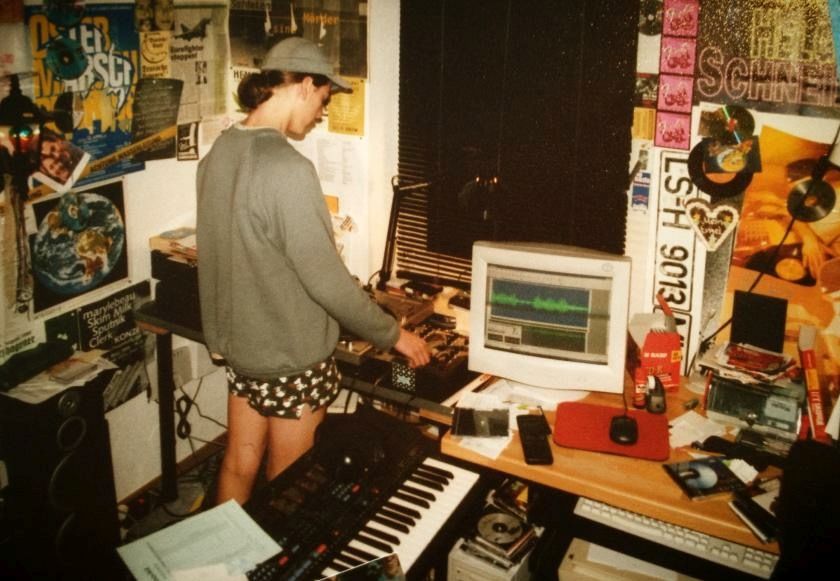 First studio was my bedroom. PC, probably something Pentium1 generation, AKAI S2000, AKAI MPC2000XL samplers, Midi-Keys. A cheap turntable and a mixer. Another turntable later, once I could afford it. The years in Berlin I moved between different rooms, but when you compare functionality it was pretty much the same everywhere. DAW as a centerpiece (using Ableton since version 1, but took a while to cross over from Cubase), harddisk recording & audio editing. Sampling. What the MPC was doing back then, an NI Machine would do today. Not much outboard gear. Mainly real instruments: Guitars (Telecaster, Stratocaster) , Stage Piano (Korg SV-1), Synths (DSI Prophet08, Minibrute..), an electronic drum set. Some funny toys and Dynacord Echocord tape delays. Records records records, reel to reel tapes, cassettes, VHS. Self made merchandise, like sweaters and shirts, towel scarfs. Whiteboards on my walls for collecting ideas and visual moods.

How do you make use of technology? In terms of the feedback mechanism between technology and creativity, what do humans excel at, what do machines excel at?

I welcome technology whenever it fits my creative process and workflow. I like to approach music more like a computer game than rocket science. The moment I spend too much time reading manuals, watching tutorials or programming a complex circuit, I would often feel like I was getting out of touch with what I really want to make a point about. That can be an emotion or cognitive lightbulb over my head, that I need to screw into a socket. Best quickly.

As part of my studies in sociology and musicology I wrote a book about ‚DJ culture in the digital revolution‘. Although I was never too passionate about academics, it helped me to gain an understanding of these relationships and become more conscious and confident about them. Software technology and algorithms helped me to develop and express my musical ideas and even to become a professional musician. So I don’t hate the ‚sync button‘ on these modern DJ-CD/MP3-Players, but I have got love for the culture, love for the game. I might have more respect for someone who knows how to mix actual vinyl records with a turntable. Just because HipHop culture taught me you need to master your skills, put your soul to it, and gain knowledge about the history of music and mankind.

So yes, machines do have skills too. And they are getting better, faster, stronger, nowadays eating up chunks of big data. So I guess I’m kind of Post-Kraftwerk-generation referring to the German band and their visionary Mensch-Maschine approach. I’d say let the machines become more advanced and let us humans take the chance and our responsibility to become more human. To make sure this planet is not entirely getting out of control.

Production tools, from instruments to complex software environments, contribute to the compositional process. How does this manifest itself in your work? Can you describe the co-authorship between yourself and your tools?

I think I scratched that above already. I love coincidences, glitches, unexpected noises and sounds. I guess microsampling is one of my strengths. To jam on something and then decide which 2% of a recording is actually valuable and make use of them. Often I spare MIDI and go into audio recordings straight. It’s a sort of limitation but it supports my flow and the human touch. If I record with great instrumentalists or vocalists of course the portion of good material is often much higher, but still I might end up being picky about bits and chops and rearrange those into that one loop I can listen to infinitely.

I think some of my best musical pieces are just 12 or 20 seconds long but never found their form as an arranged piece of music. Sometimes it’ll form, when I’m free and in the mood to play with building bricks, LEGO-type. Then make a spaceship, an animal, a plant, a tune. Or think of building a castle made of sand. Like in life or politics, sometimes it is a good thing when a system crashes and crumbles. If you capture that moment it might be a relevant contribution to the endless vast sea of digital music.

Collaborations can take on many forms. What role do they play in your approach and what are your preferred ways of engaging with other creatives through, for example, file sharing, jamming or just talking about ideas?

I get inspired by other creative people, their skills and ideas. Not only in music. When I was a kid I seriously wanted to become a space traveller. Today I’d say interdisciplinary creativity is my personal ‚intergalactic‘ travel. So I listen, see things, read stuff and they transform into ideas of what I would want to do. When working in a team, I can always enjoy different roles. In duo-work with other DJ-producers it always depends on the skill sets and personal signature. What each person focussed on in their own process and then trying to complement and interpret that in your own style. That might happen entirely remotely, with file sharing indeed. Sometimes wordlessly, sometimes combined with abstract communication. And sometimes you just sit down and vibe together, and inspire each other with sparkle and form a vision mutually.

In a recent case with my friends Mat.Joe we just came up with this running gag about eating ‚Kohlrabi‘ (a type of turnip) and its spiritual, psychedelic effects. So now when we sit together we consume above-average amounts of Kohlrabi with sprinkles of different salts and peppers and then seek our high in the music.