Name: worriedaboutsatan
Members: Gavin Miller, Tom Ragsdale
Nationality: English
Occupation: Producers
Labels: Gizeh, This is it forever
Musical Recommendations: GAV: I would say have a listen to Capac, an electronica band we know from a while back. We’re releasing their new album on our label, and it’s really, really good! Another one is Russell. M. Harmon - a friend of ours from the UK, who moved to Iceland for a few years, then moved back recently – he’s really great and a super nice guy too.

When did you start writing/producing music - and what or who were your early passions and influences?

TOM: We started around 9 or 10 years ago, although it actually feels about 2 or 3! Everything is still very fresh. We still feel we’re in the early stages and we’re still finding out who we *are* as a band.
We started listening to Boards Of Canada, Underworld and Surgeon for our initial influences. We just wanted to mess around with beats and guitars at first and maybe play the occasional gig. It’s now all we think about and takes all of our time and money!

For most artists, originality is first preceded by a phase of learning and, often, emulating others. What was this like for you? How would you describe your own development as an artist and the transition towards your own voice?

GAV: I guess when you’re young, you always try to emulate stuff you hear – I’d play along to CDs, but go off on tangents by myself and try and work out something new. Once I started trying to piece together music by using old software that I borrowed from my brother, I started to find what I wanted to do – mixing electronic elements with guitars. I listened to bands like Boards of Canada and Mogwai, and wanted to marry the best elements of both into something new.

TOM: We started on the oldest and crudest equipment you could imagine! Working with our old equipment was definitely a challenge back then, especially as we didn’t quite know how to get the results we wanted. We’re more focused on our sound now, and we know how to achieve it. The studio has been upgraded significantly too!

Tell us about your studio, please.

GAV: The studio is in Tom’s house actually, which works really well for us. It’s quite a big room, which is full of gear, so it gives us a nice relaxed environment to try ideas out. It’s quite rough and ready, so its fairly informal – you can grab cup of tea and start playing something – it’s nice! It keeps us in a nice, chilled mood, so writing becomes easier and a lot more fluid than in a lot of other, blander studios we’ve been in before. It obviously helps to be in a good mood when doing stuff, and having the technology all here in one room is great for trying ideas out and not getting bogged down in trying to find synth sounds all the time for example.

What are currently some of the most important tools and instruments you're using?

TOM: To be honest, it’s all coming down to guitars, and doing unusual and interesting things with them. Not a lot of people are using guitars these days as most producers are only thinking ‘inside the box’, and guitars have a real ‘violent’ feel to them when used in the right way. A guitar is unpredictable and never sounds the same every time you touch it. We have secret guitar techniques that we’re into recording and we make them sound like synths.

Many contemporary production tools already take over significant parts of what would formerly have constituted compositional work. In which way do certain production tools suggest certain approaches, in which way do they limit and/or expand your own creativity? Are there any promising solutions or set-ups capable of triggering new ideas inside of you as a composer?

GAV: I suppose using things like Ableton is a great way to expand the way you make music, outside of just writing notes on a guitar, but whereas there is a temptation to get lazy, and just loop samples all the time, the trick is to use these production elements and do something unique with them. For example, using weird samples, or processing field recordings and turning them into something else, like otherwordly atmospheres, etc. On our latest record, we listened to a lot of old dub tracks and stuff like David Axelrod albums, so we tried to mangle sounds from them into our tracks and build up new songs from them.

Could you describe your creative process on the basis of a piece or album that's particularly dear to you, please? Where do ideas come from, what do you start with and how do you go about shaping these ideas?

TOM: Yes, totally. Most of our music stems from listening to what other people are making, although rarely in the style we write. We could be listening to the music of Ligetti, Steve Reich or Slayer and thinking “how can we make our music with the intensity and rage these guys have?”. Our music is shaped around intensity, not conventional structures you find in most electronica.

GAV: I think if you try to only release what you feel is good enough, you create a strong musical identity, and if you’re always releasing things, it can start to work against you. We’ve not released an album as worriedaboutsatan for 6 years, and we saw nothing wrong with that – it was just the right time to do something this year. The internet makes it easy to just release any old thing, but I guess there has to be a bar you set for quality. We love artists and communities like Border Community, who only release stuff they feel really passionate about, and whether an album takes 2 months or 10 years, it’s only done when it’s ready. 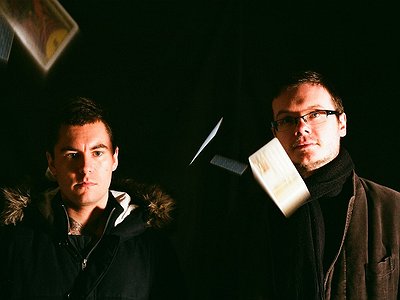 " A guitar is unpredictable and never sounds the same every time you touch it."