How strictly do you separate improvising and composing?

TOM: We can’t! We compose strictly by improvisation!

How do you see the relationship between sound, space and composition and what are some of your strategies and approaches of working with them?

GAV: The sounds we make are always influenced by things around us – the city we live in, and the space around us. It’s all interlinked, and if it wasn’t, the final product would suffer – our music is an exploration of the environment we’re in.

What's your perspective on the relationship between music and other forms of art – painting, video art and cinema, for example – and for you and your work, how does music relate to other senses than hearing alone?

TOM: We’ve had a lot of our music used in films, so we know how music can enhance visuals! When set to picture, music can completely change the perception of what you’re seeing. It can make an image seem upsetting with the right sounds, or the completely opposite end of the scale. I think it’s hard to feel as much emotion from just pictures alone, when compared to listening to music.

What's your view on the role and function of music as well as the (e.g. political/social/creative) tasks of artists today - and how do you try to meet these goals in your work?

GAV: Music and musicians can play a great part in things like politics and social interaction – it’s a hard line to walk, but it’s all about creating an aesthetic and inviting people in to that world you’ve created. We try to do this with the album art and song titles, for example - it’s dark, and represents a certain view of the world.

Listening is also an active, rather than just a passive process. How do you see the role of the listener in the musical communication process?

TOM: Hopefully it transports them to a place they can never get to in their daily lives. I like to think of every listener as having a different experience, and each person getting something very different from the tracks. The music portrays our moods and very much a journey through our own minds.

Reaching audiences usually involves reaching out to the press and possibly working with a PR company. What's your perspective on the promo system? In which way do music journalism and PR companies  change the way music is perceived by the public?

GAV: We always think that good music will find it’s way eventually. If it takes 10 days or 10 years, if it’s good enough, it will reach it’s audience eventually with hard work and determination. It’s tough when you’re in an industry which revolves around blogs and money and PR people, but there are always good people working in there to find new sounds and champion great music. Sometimes though, there’s just not enough of them! The dross usually fades away after a while though, and the amount of music that falls by the wayside after 5 minutes of being ‘big on the blogs’ is ever increasing with each year. But, I guess that’s just the ‘industry’ part of the music industry. It’s always been that way.

Do you have a musical vision that you haven't been able to realise for technical or financial reasons – or an idea of what music itself could be beyond its current form?

TOM: I would basically like to have a huge wall of Moog modular synth units and a guitar with all 6 strings tuned to high E, and I would set everything going through the same chorus pedal creating a tidal wave of noise. Unfortunately I can’t afford this at present.

Find out more about worriedaboutsatan on their bandcamp page. 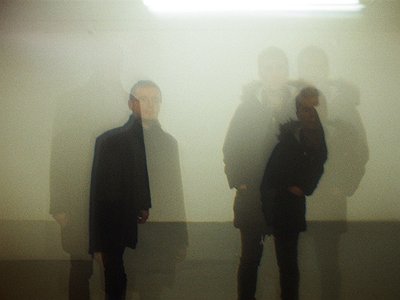 "Our music is an exploration of the environment we’re in."