If you enjoy this interview with Echo Bloom, you can find more information and recent updates on their website: echobloom.com

When did you start writing/producing music - and what or who were your early passions and influences?

I got my first job at a little Greek bar in the town I grew up in and finally had a little pocket money, almost all of which would go to records.  I'd start with the stuff I liked on the radio - which in Pensacola, Florida was mostly Southern Rock and country music - figure out who they were influenced by, and just go down the rabbit hole.  Every path seemed to end up back at folk music, so I got really into the old Anthology recordings, Smithsonian series - basically anything I could get my hands on.  It was like folk music was the common thread everything else was hung onto, and once I saw the progression - how these ideas were recapitulated, merged with other genres and technologies, and then rebroadcasted - I saw how I could make my own approach.
I kept going backwards and forwards, tracing these threads back to find how they developed.  Bob Dylan, Woody Guthrie, Nick Drake, The Beach Boys, Os Mutantes, George Gershwin, Leonard Cohen, Fairport Convention, Lynyrd Skynyrd.  I passed through a lot of things, but folk music was and is always at the core.

For most artists, originality is first preceded by a phase of learning and, often, emulating others. What was this like for you? How would you describe your own development as an artist and the transition towards your own voice?

I would chart that transition as a process of continually learning and unlearning; learning to focus my concentration, trust my intuition and hone my technique.  Unlearning what I already know and have gotten too attached to - like the patterns my fingers instinctively fall into when I sit in front of an instrument, or a familiar lyrical voice.  I find the more I learn to unlearn, and trust where I'm going, the happier I am when I get there.

The first record I did I recorded at home, and I had envisioned this huge orchestral sound.  The issue was that I realized I didn't have any kind of firm idea of how to communicate this with the people I'd convinced to record.  So I got this gigantic sheet of butcher paper and created this big visual score that covered the entire wall.  It was all lines and swooping marks, pasted cutouts from magazines.  Really useful for me as a mechanism to nail down my ideas, but pretty useless as a way to efficiently communicate musical ideas to other people.  I needed to learn how to notate.  So I did.
Another area I'm continually working to improve is on how to execute large-scale projects (whether they're albums, tours, shows, or whatever).  One thing that's helped me with that is sorting algorithms.  They model how you can take a batch of random numbers and order them sequentially.  There are a lot of different ways to do it, but the most effective method is to break things down into continuously smaller chunks, and then do successive sweeps on it. That's the model I try to emulate in my work at large; I find it gives things an internal coherence and external consistency.

Tell us about your studio, please. What were criteria when setting it up and how does this environment influence the creative process? How important, relatively speaking, are factors like mood, ergonomics, haptics and technology for you?

At home I've got a small desk by a window.  There's a framed map of the Fushimi Inari Shrine on top of it, which I think is really beautiful.  The desk has a laptop, a notebook (I'm using a Leuchtturm notebook I got in Hamburg last year on tour) and a lot of nice drafting pens.  I try to minimize cables and clutter as much as possible - there's a lot of it, and minimizing distractions really does improve my general creative mindset.  My desk is surrounded by a large rack of instruments, a keyboard, and bunch of microphones.  I try to have things arranged so I can get going as quickly as possible when I'm ready to go.
As much as I appreciate a clean environment where I'm working, I have tried to train myself to not require it.  The only hard requirement I've got is that it has to be quiet.  I've got these gigantic earmuffs that are used for rifle shooting that I often wear when I'm not at home and in a noisy situation.

What are currently some of the most important tools and instruments you're using?

The standard stuff: Sibelius for scoring.  Pro Tools for sketching out arrangements.  Native Instruments Kontakt has been incredibly useful for orchestration; the MIDI sets that come along with programs are often awful, and without playing something you can't get a sense of how it will sound when it's played by a human.  I have this weathered and beaten Seagull acoustic guitar that I've had since High School that is still my go-to when I start writing.  I use my phone to record stuff all the time when I'm not in front of a computer.
As for the less standard stuff, I've got this ancient amp I call the fartbox that was made out of an old tape machine.  It really only feeds back, but it does it beautifully, and I use it for lots of stuff.  There's a program called Paul Time Stretch which is this ancient OS X binary that you can use to slow down audio tracks way more than most programs will let you to (you could make a song be days long if you wanted to).  You can make some really beautiful sounds with it if you're careful about what goes in. 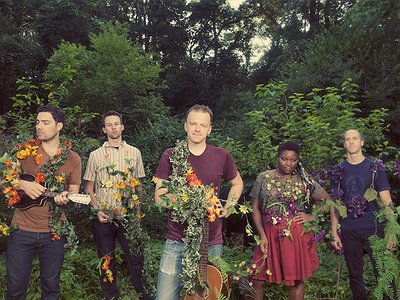 "I've got this ancient amp I call the fartbox that was made out of an old tape machine. It really only feeds back, but it does it beautifully"