Many contemporary production tools already take over significant parts of what would formerly have constituted compositional work. In which way do certain production tools suggest certain approaches, in which way do they limit and/or expand your own creativity? Are there any promising solutions or set-ups capable of triggering new ideas inside of you as a composer?

I think having a fluidity between composition and recording makes both even better.  For our recent record Red, I did some scoring, then took it to a band and worked it out, then took it into a computer and chopped it up, then did some more scoring, and then repeated it a few times.  Continually going back to the drawing board and ripping things apart hugely improved the sound, and definitely wouldn't have been possible had I recorded a finely crafted score.
For triggering new ideas, there are a few things I've been trying recently. One is singing guitar lines; if I'm trying to come up with an instrumental part it's often better for me to figure it out vocally, then figure out how to play it on the instrument I'm writing it for.  If you start on the instrument, you (well, I guess I) end up falling into the same things that I've done before. If I'm stuck on a song on guitar, I might also switch to another instrument (banjo or keyboards for example).  Or, I'll take it, slow it down hugely, put it on a loop, and play something on top of it, and make something that's inwardly referential. If I'm trying to figure out a melodic line on top of a backing track, I'll also put it on a loop, put on some headphones, take a walk, and kind of sing to myself as I walk around.  Usually the rhythm of my feet on the pavement and the repetition of the backing track beings out new ideas.

Could you describe your creative process on the basis of a piece or album that's particularly dear to you, please? Where do ideas come from, what do you start with and how do you go about shaping these ideas?

Blue was a really architectural album for me, so it's probably the easiest to describe.
I went to Berlin in 2010 to write the first record of this triptych that I wanted to do.  I limited my outside listening to around 10 albums that I wanted to inform the record more heavily.  I started with songs and then built out the scores from there.  By the end I had this end-to-end score for the entire album (which you can see on my website).  Then, I got back and had to figure out how to execute it.  Form a band, find a studio for the bigger tracking, build a home studio for the smaller tracking, rehearse, and record. That part took about a year and a half.
The execution of that was really like building a house from a floor plan.  Whenever anybody had a question about a melody or a rhythm, they could just go to the score, and the answer was there.  I learned a lot about notation and instrument ranges on that one.

I think it's an amazing time to be an artist just because of the access.  It's so easy to get exposed to new stuff, or to learn about how things are put together from a production perspective, or to get in contact with people.  Which I think ups the bar for originality, just because there's so much more. Those collisions are the most exciting to me.  The stuff I'm finding most exciting right now is pretty much all in R&B.  The most recent D'Angelo record is really great.  That's one of those things, like a really amazing book, where it's hard to imagine how it was crafted.  Similar for the Kendrick Lamar album.  The Jamie XX record was kind of everything I wanted it to be also: these beautiful collisions.

How strictly do you separate improvising and composing?

For me, they're very separate.  I'll improvise ideas for songs, record those snippets, then go back and figure out how to make them into songs.  Like: is this part a bridge or a chorus?  What's the structure from that point?  Once I scaffold out the form and write the lyrics, I try to break it apart some more and see how it fits together.  That last part is where it gets more exciting for me; you can move around these bigger pieces in more dramatic ways.

How do you see the relationship between sound, space and composition and what are some of your strategies and approaches of working with them?

I think locality plays a hugely important part in composition.  I ended up writing most of our record Blue in libraries, after taking long walks.  And when I listen to it I can still hear those places; they're baked into the foundation.  So for me, I try to recognize that and write in beautiful places.  The Rose Reading Room at the New York Library's Schwarzman building has these really magnificent ceilings and it's a humbling place to work.  For me, the writing is really different from the editing, which for me takes place just about everywhere. 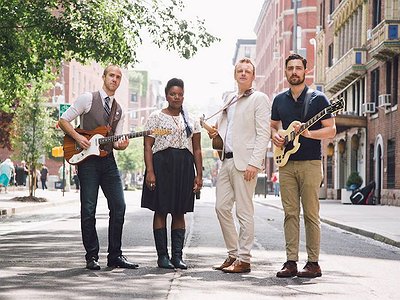 "I think locality plays a hugely important part in composition. I ended up writing most of our record Blue in libraries, after taking long walks. And when I listen to it I can still hear those places; they're baked into the foundation."