What's your perspective on the relationship between music and other forms of art – painting, video art and cinema, for example – and for you and your work, how does music relate to other senses than hearing alone?

I view medium as a spoke from the central hub of an artistic expression, so I try to draw inspiration from a bunch of different types of artists.  Gerhard Richter inspires me for the way he bounces around genres, and for maintaining such a high level of quality with a wide output.  Stanley Kubrick is inspiring because of his obsessive attention to technical detail while not sacrificing style.
Architecture is important to me because of the way ideas are developed.  I majored in architecture originally in college before I switched around, and the creative process behind things - the way a final target was broken down and abstracted - was hugely influential for me.  The idea of creating multiple scale models of a building correlates really nicely to music.  Frequently I'll do several demos of pieces while I'm working on them, each one focusing on a different aspect that I'm trying to tease out in the final structure.

What's your view on the role and function of music as well as the (e.g. political/social/creative) tasks of artists today - and how do you try to meet these goals in your work?

I try to create a well balanced meal.
Music has the capacity to inspire social change, but not the responsibility to do so.  A lot of pieces of music I really adore are strictly confections.  And that's OK.  But in the context of an album, I view those kinds of pieces as dessert, whereas the ones that engage your mind are the core vegetables (but, to stretch the metaphor maybe too far, really well prepared vegetables that you enjoy eating).
My goal is to paint a picture with words and sounds that allows people to get outside of themselves and see something differently.  The effect - that engagement - can be really targeted (I want you to think of this issue in a different way) or it can be more generalized (I want to paint this abstract picture, and for you to come up with your own interpretation).  And while it's critical to engage listener's minds, music has the added benefit of being able to engage their hips.  Some of the most interesting social songs are the sneakiest: where, only after listening for a while, do you realize that the song you're rocking out to in the subway has a social message.

Listening is also an active, rather than just a passive process. How do you see the role of the listener in the musical communication process?

I view a successful song as providing exactly half of a really compelling picture.  The audience, in the act of listening, completes the song by interpreting it and adding their half, which is their interpretation of the song through the lens of their personal experience.  I always try to balance specificity and ambiguity so as to keep it around that halfway point.

Reaching audiences usually involves reaching out to the press and possibly working with a PR company. What's your perspective on the promo system? In which way do music journalism and PR companies  change the way music is perceived by the public?

Whether you like it or not, commerce is a component of art.  The people that have been most successful at it (David Bowie, Madonna, Lady Gaga) have all been able to take some agency in the way their image is crafted and distributed into the world.  They made the act of marketing themselves an art project in itself and because they took that ownership and control over their image, they were able to make it a little more mutable and form it differently year to year.  But music exists to be heard.  It's heard by an audience. That audience learns about who you are from their media world (whether that media is traditional or social).
In terms of influence, PR can't change the core construction of the piece they're listening to, but it can change the expectations somebody has when they initially listen it, which can have a huge effect on how it's perceived.  You can say "Hey, listen to this song, it will make you think about Freddie Gray differently."  That changes how your initial listening happens.  Ultimately, hopefully, you live with something and figure out what it means to you.  You make it your own.  But the PR is what gets it to you in the first place.

Do you have a musical vision that you haven't been able to realise for technical or financial reasons – or an idea of what music itself could be beyond its current form?

Financial limitations constrain my work in a lot of ways.  From the perspective of the studio, I've frequently wanted to bring in a bigger string section for some pieces, or spend more time crafting sounds for percussion or vocals.  But studios are expensive, and you need to be targeted and move quickly through them.  The upside is that those restrictions can force interesting creative decisions to be made.  I recorded a lot of our most recent record at home to save money (a lot of guitar, bass, and ancillary percussion parts were recorded in my home studio), and did all of the editing on my own.  It let me live with the material for a little longer, which was really positive.  The ultimate restriction I have is that I have to do other things in my life to make ends meet.  It affects how much time I have to work on music.  If I was able to focus on music and touring 24/7, I could probably pump out 2 records a year.
From a live context, there are a lot of things I'd like to do.  I'd like to integrate more time-based warping and guitar processing into our sets.  I've got a bunch of Max/MSP patches that would be cool to integrate, but finding the right balance between sonic sculpting and amount of equipment is important.  We're always trying to find ways to do more sonically, but keep our live rigs simple and portable.
In terms of what the medium could evolve into, I'd love to see more interactivity and video brought into a live context.  Think of the band at the front as the directors and the audience as participants in a huge orchestra.  It would be a really interesting social experience. 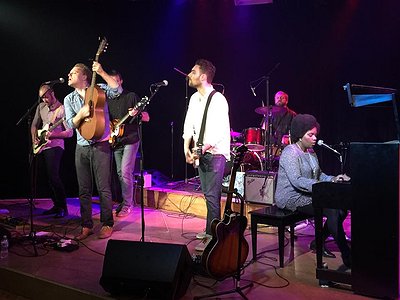 "Some of the most interesting social songs are the sneakiest: where, only after listening for a while, do you realize that the song you're rocking out to in the subway has a social message."